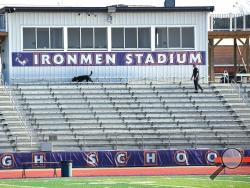 DANVILLE — For the second day in a row, a bomb threat disrupted classes at Danville Area High School.

But on Tuesday, instead of sending students home early, school officials instead gathered them all in the auditorium, locked down the school, and had police do a three-hour sweep of the building to clear it of any potential risks.

“Every nook and cranny was searched, and no students were harmed,” said acting school superintendent Ricki Boyle. This time, a written threat found shortly before 9 a.m.kicked off the lockdown, said Montour County District Attorney Angela Mattis.

Other officers detoured traffic away from the grounds until the all-clear was given shortly after noon.

“It’s back to school as normal,” said Boyle around that time before entering a meeting with her administrative team.

School officials say both days will be counted as regular school days since no other buildings were closed and high school students remained in school for most of Monday and all of Tuesday.

She said her office is taking this string of threats very seriously. No one’s been arrested yet, but she said a full prosecution would follow once a suspect or suspects can be identiied

Even if a student is under 18, they could find themselves facing adult charges, Mattis saidl.

“It’s too soon to speculate but there are some students who are 18, and others may be certified as adults if certain circumstances are met,” she said.

Mattis wouldn’t say if she suspected that the two incidents were related,  but she did say “the timing is certainly suspect.”

“In today’s culture, any kind of a threat made at a school has to be taken incredibly seriously,” Mattis said.

“I can understand parents being frustrated,” she went on.

“It’s disruptive to education, law enforcement and my office,” she said.