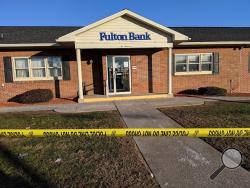 BERWICK — A man came into Fulton Bank dressed all in black with his face covered and demanded cash from the tellers in a note that said he had a bomb Tuesday afternoon, police say.

The man got a large amount of money and then fled the South Poplar Street bank around 3 p.m., headed south, they say. No one was injured in the robbery, Police Chief Ken Strish said, and no one actually saw any bomb.

Thomas Crane was walking home from his job at Tri-County Lumber. He happened to be dressed in black and was stopped twice by police, he said. "Luckily they knew who I was."

Officers describe the robber as about 6 feet tall and between 220 and 240 pounds. He had a hoodie covering his face during the robbery.

Afterwards, the bank was surrounded by police tape, with a sign saying it was "Closed due to emergency." Officers went in and out of the branch, and escorted a group of bank officials in as well.

Police planned to bring in a crime scene unit and a dog to try to track down fingerprints or scents.

We will have more details as they're available.