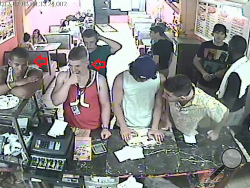 BLOOMSBURG - Police are looking for help identifying two men who grabbed around $600 from the register at Frank's Pizzeria early Wednesday morning. The theft took place at 12:33 a.m. Wednesday. A surveillance video shows one man in a red tank top with an ID card lanyard around his neck punching keys on the register before a cash drawer opens up. Then he and another man next to him grab and pocket cash from the register. The missing money represented almost an entire day's sales, said restaurant owner Frank Nash. If you have any information on the suspects involved in the theft, town Ptlm. Ryan Edgar can be reached at 784-6779, according to a press release from Bower Security. Here's the surveillance video:Reporter Pete Kendron will have more on the theft in Thursday's Press Enterprise.

Columbia County’s sheriff’s department may help town and university police patrol Bloomsburg to break up large off-campus parties in an effort to prevent spread of coronavirus.

BLOOMSBURG — Bloomsburg University has another 50 cases of COVID-19 among its students and staff, bringing the school's total to 218 cases, according to numbers the school released...

BLOOMSBURG — Beginning Monday, Bloomsburg University will shift students almost entirely to online courses in response to an outbreak of coronavirus cases among students.