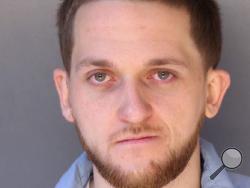 BERWICK — Police are looking for a Berwick man they say repeatedly locked two children in closets as punishment.

The youngsters, ages 9 and 5, also told police they slept in the closets, which had quilts, blankets and pillows on their floors.

One closet had a metal latch with a padlock on it, Children and Youth workers told police. The other was missing the doorknob on the outside, but still had an internal locking mechanism, which meant that someone had to place an object into the lock in order to open it, according to court papers.

Children and Youth workers said they learned of the situation on Oct. 12, when they went to remove the children from the house at 411 Chestnut St..

The two lived with Kerry Michael Guire, 30. The children’s mother had been in prison for several months at that point, leaving Guire in charge of them, said Detective Greg Martin.

When the caseworkers arrived at the house, they found the 5-year-old sitting in front of one of the two closets in the bedroom.

“I sleep in there,” the boy told them, pointing to the closet.

Guire explained the children were sleeping in the closets because they weren’t allowed to sleep with him anymore. But the 5-year-old told the caseworkers that he was also closed in the closet sometimes when he is bad.

The 9-year-old interrupted, saying, “No, don’t you remember, the doors aren’t closed all the time.”

On Nov. 1, the children were interviewed at the Child Advocacy Center. The 5-year-old continued to say both children slept in the closets and were locked inside the closets when they were “bad.”

Police went to the house, but found Guire had moved. The new residents let officers see the closets — one still had the metal hasp for a padlock, though the door knob had been replaced on the other closet.

In an emergency, the children wouldn’t have been able to escape the closets, police said.

Martin charged Guire March 20 with two counts of endangering children. But they haven’t been able to find him.

Court papers list a new address for him, at 1818 Spring Garden Ave., Berwick.

Anyone who knows Guire’s location can reach Berwick officers through county dispatchers, 570-784-6300.