Skip to main content
Police to hit-and-run driver: We have your car parts 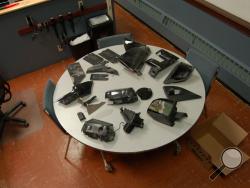 NUMIDIA — A hit-and-run pickup driver plowed over five mailboxes and a speed limit sign, leaving over a dozen vehicle parts scattered near the intersection of Center School and Middle roads in Cleveland Township late Saturday or early Sunday.

“We are confident that you must have been either driving while impaired — alcohol or drug caused — sleep deprived or was distracted while using a mapping application to find your way home,” Locust Township Police wrote in a tongue-in-cheek press release addressed to the unknown driver.

The department described the pickup as either a 2015 or 2016 black Ford F-Series truck.

In its release, Locust Police offered to return recovered pickup parts to the truck’s owner.

“We are sure you are an honest person and have been trying to determine where you may have left your parts during your late night travels,” the report states. “Well, no need to look any further, we have them.”

Officers recovered a driver’s side mirror, part of a grill, a gas cap, part of a truck box and other parts from the pickup.

Police say the pickup driver was traveling west on Middle Road towards Route 54 in Bear Gap and may have traveled up Cemetery Hill Road off Route 42 toward Middle Road.

“We are asking that you do the right thing and come forward to claim your parts,” the crash report added. “The residents shouldn’t have to pay for the replacement of their mailboxes because you made a very poor decision that night.

“In all seriousness, we are thankful that no one got hurt, including yourself. But what if? What if that would have been a large tree or a utility pole, a disabled vehicle with someone changing a tire or waiting for a ride. A resident who is awake at that time and went out to pick up their newspaper.

“The outcome could be tragically different at this time, you or someone else could be laying in a hospital bed, or worse, in a morgue.”

Anyone with information about the hit and run is asked to contact Locust Township Police at 570-799-5806.