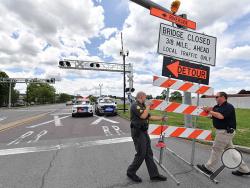 DANVILLE — Work on a railroad crossing in Riverside created a traffic tie-up both there and here Friday afternoon, as the lane on the Route 54 Danville-Riverside bridge leading to Riverside was shut down, and traffic on the lane heading to Danville was restricted.

The restrictions are so that Norfolk Southern Railroad Co can replace the railroad crossing on Route 54 — Elysburg Road — just off the Danville-Riverside bridge in Riverside Borough.

For traffic headed to Riverside (technically eastbound traffic on Route 54) PennDOT has suggested taking Route 11 to Bloomsburg, crossing the Route 42 bridge and following Route 42, and then Route 487 to where it meets Route 54 in Elysburg.

For westbound traffic, cars are taking a dog leg through Riverside, using Third Street, Chestnut Street and South D&H Avenue to get around the construction site and to the bridge. But tractor trailers are forbidden from the detour. Instead, they're being directed to take Route 487 and Route 42 to get to Bloomsburg, and then Route 11 to reach Danville.

Police were monitoring the span Friday and ticketing trucks that tried to cross the Danville-Riverside bridge. Between fees and fines, the tickets totaled just under $700, they said.

The railroad work should be complete by 5 a.m. on Tuesday.

BERWICK — More than 20 feet of concrete soffit from the former Geppetto's crashed onto the sidewalk below on Thursday afternoon, leading the borough to close off the sidewalk around the...

BERWICK — Police found a bloodied man in an apartment in the 100 block of North Mulberry Street this morning, setting off a daylong investigation that still wasn't completed as of late...