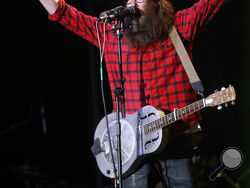 Christian roots-rocker Crowder’s show headlining Bloomsburg Fair’s grandstand Tuesday was outstanding because of the music he played — from booming, forceful rock to the intricate, subtle, bluegrass-tinged music for which he may be best known.

But what made his show even better was that, in a too-short 18-song, 90-minute set, Crowder and his excellent four-man band seemed to capture the virtual essence of every stage of a believer’s journey.

The show started with Crowder as the fiery soldier of Christ, blasting out of the gate with the flat-out rock of “Prove It” from his Christian chart-topping second disc, 2016’s “American Prodigal,” and from there into a blistering “Run Devil Run,” best known from its use on Sunday Night Football, but now seemingly infused with intensity — not to mention strong slide guitar.

It was as if Crowder was unleashing his first tour after being quarantined by a pandemic ... er, wait.

“Oh, this is the best,” the singer, dressed against the cool (59-degree) night in a red-cheked flannel shirt and trademark cap. “We’re so glad to be here tonight. It feels so good out here.”

That was the one and only time Crowder addressed the too-small audience of 2,272 until two-thirds of the way through the show (more about that later). It was as if he had an urgent message to get out and was determined to do it.
And he did. “Glorious Day,” which Crowder imntroduced as “A resurrection song,” had great guitar nad featured his voice hollering out. “Higher Power” from his new album, “Milk & Honey” was especially forceful, and had all the power of urban rap-rock with its hip-hop interlude. “All Your Burdens,” also from “American Prodigal,” juxtaposed that with mandolin before it, too built into just what the repeated lyrics “We Shall overcome” suggests: a steamroller rocker.

The concrt’s mid-section could have represented the Christian’s search. The spooky title song from his 2018 album “I Know a Ghost” — he introduced it as “A Holy Ghost song” — was played on a stage in a dark-green hue, often pierced by flashing lasers. “Ghost,” with its dispairing mood and ominous lyrics “Get ready!” evoked the End Times better than anyone since early U2.

And “Red Letters” was more thoughtful, with Crowder at the keyboards, his voice a clear clarion call against added violin as the stage was bathed in the song-title color.

Then the concert turned to worship music. “Come As You Are,” Crowder’s 2018 No. 1 gold hit, was a song of submission, his voice more vulnerable. “How He Loves,” his 2009 gold hit with David Crowder Band, had him on gentle acoustic guitar, backed by slide guitar and the crowd singing along.

“God Really Loves Us” from the new album also had the singer on acoustic guitar, his vulerable voice matched with the moaning of a lap steel guitar.

That segment of the show ended with the hium ending that song morphing into the thumping of “Lift Your Head Weary Sinner (Chains),” with another rap interlude.

After 12 songs, Crowder finally talked to the crowd again, saying, “I don’t know if you’re wondering this or not, but I’m having a great time. Goodness gracious I hope I don’t lose the sacredness of us getting together like this.”

The fair show kicked off his tour to support “Milk & Honey,” and Crowder played its title cut, apologizing for playing so many new songs: “If you don’t know it, I’m sorry.” He needn’t have, it was very good.

The show ended like a full-on gospel celebration, starting with a hoedown version of Hank Wiliams’ “I Saw the Light” mashed with a banjo-centric take on the hymn “I’ll Fly Away.” He followed that with a  mandolin-tinged, faithful verion the hymn “Because He Lives,” then was back at the keyboard for the beautiful hymn “He Is” from the new album, sung with intent and perhaps the best of the night.

But he closed the show — there was no encore — with his 2017 gold hit “All My Hope,” which he called “church music” — full-on gospel, then his latest hit, this year’s Christian chart-topping “Good God Almighty.”

It was both musically magic and a celebration of his faith.

And just as in that time period, the five-member group’s message was as much as the performance, with several interludes of preaching.

It was edifying, to be sure. Perhaps the best was the rolling, percolating “I Know,” which the lead singer aid was being played live for the first time.

Firefighters pulled an unconscious woman and four kittens from a trailer early Monday after using a watering can to douse a fire on the front porch of a Briar Creek Manor home.

GREENWOOD TWP. — A predawn fire gutted a historic general store in the Greenwood Valley, chasing several adults and three children who now live there out into the cold.

RUSH TWP. — A rail expansion at the Boyd Station soybean processing facility is in full swing and should be completed by February, company officials say.

In January of this year,...