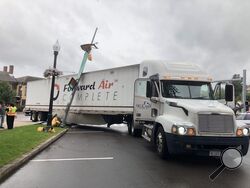 BLOOMSBURG —A tractor trailer driver who told police he was misled by GPS tried to turn from East Street onto College Hill Tuesday morning, taking out the traffic light at East Street’s intersection with Main Street at Lightstreet Road.

The traffic light that controls traffic heading north onto Route 487 and South on Route 11 from East Street was knocked over. It still functioned, changing color as the pole leaned against the truck.

Driver Kenji Jeeter, 41, of Spartansburg, South Carolina, was driving for Lili & Alex Trucking LLC of Statesville, North Carolina when he attempted the turn.

He sat in the truck afterward, talking on the phone using a headset.

Police said he was headed to Bethlehem when his GPS told him to bear right onto Lightstreet Road.

“It meant to go straight, then turn,” Ptml. Thomas Pfeiffer said, “That’s the problem, they (drivers) follow whatever it says.”

Traffic backed up at the intersection Tuesday as Bloomsburg Fire Police worked to control traffic.  Temporary stop signs were in place shortly after the crash and College Hill was shut down.

Police say repairs could last until this morning. Police say they are waiting for the traffic signal company to come and replace the pole and damaged lights.

Pfeiffer said the driver will be cited for careless driving and leaving a road laned for travel.

We’ll have more on the crash in Wednesday’s edition.

Your dream date to the prom stands you up at the last moment, and a girl you’ve barely thought of agrees to go. It might not have been what you thought you wanted, but darned if you don’...

Pat Benatar, the 1980s hitmaker who was to headline Bloomsburg Fair grandstand tonight, has canceled, citing “an upper respiratory illness unrelated to COVID,” according to a statement...

Christian roots-rocker Crowder’s show headlining Bloomsburg Fair’s grandstand Tuesday was outstanding because of the music he played — from booming, forceful rock to the intricate,...