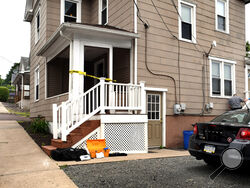 BLOOMSBURG — Police here are investigating two robberies and a car break-in early Saturday morning — it's not yet clear if they were related.

And officers are asking for the public’s help in identifying suspects, in addition to warning residents to be extra careful, especially until police can determine whether victims were targeted or selected at random.

They are also asking for those with surveillance cameras that might have picked up the robbers or other relevant details to contact them.

Police Chief Scott Price said even those who don't think their cameras picked up anything might have information that can help the investigation.

The cheif said the most concerning of the incidents happened between 2:30 and 5:30 a.m. when three men broke into a college rental property at 128 E. First St., and a young man was pistol whipped, Price said.

“Three armed Black males broke into the residence, ransacked the residence and stole property from the victim, including a cell phone and debit card," Price said.

The man was able to escape the home, and ran down the street yelling for help.

Someone heard his pleas and called 9-1-1, according to Sgt. Leonard Rogutski.

Rogutski said the man reported that he had been pistol whipped. His injuries were consistent with that.

He was  taken to the hospital and treated for his injuries, which included severe cuts and bruising to his face and upper body.

Rogutski said police did speak to the man at the hospital, but were prioritizing his treatment before further interviewing him.

Rogutski pointed out that it had been difficult for police to determine exactly what had been stolen from the house because some college students who had been living there went home for the summer and left some of their stuff there.

Price said the earliest incident came in at about 2:30 a.m. when a sixteen-year-old man was walking his dog on the Rails to Trails path near Millville Road.

“He was approached by what he described as four armed Black men in black clothing,” Price said. “And he was robbed.”

Price said the robbers took the boy’s cell phone, but the boy wasn’t hurt in the incident.

In a third incident, the owner of a vehicle parked in the parking lot of the Bloomsburg Diner also found his car ransacked and burgled, which he believed happened very early Saturday morning.

Police have not yet determined what was stolen from the vehicle, but they also found other items surrounding the car, which they believe might be from other vehicles or possibly a residence.

“We’re not quite sure whether there were multiple vehicles broken into,” he said.

State Police forensic services were called to do scene processing and extra officers were called in to do interviews and review surveillance footage, Rogutski said.

He pointed out that although the overnight shift isn’t generally the busiest shift, it often is the shift during which the most severe crime happens.

Car plows through crowd at benefit for fire victims

UPDATE 1:33 a.m.: The person who died in when the car plowed into a crowd in Berwick was a 50-year-old woman from Wilkes-Barre, according to Columbia County Coroner Jeremy Reese. State...

NESCOPECK— Recovery crews have pulled 10 bodies from the wreckage of  a home at 733 First St., Nescopeck, where a fire broke out early Friday,...