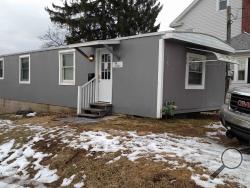 BLOOMSBURG — A gunshot heard early Friday outside a student house on Pine Street sent police rushing into the neighborhood but no suspect or suspects could be located.

No one was hurt in the gunfire, which happened just after midnight, but police say there was some damage to property in the area of 70 Pine St. where two Bloomsburg University students reside. They didn't specify what the damage was.

Police say they recovered evidence at the scene and interviewed other residents, but it appeared that no one witnessed the shooting.

The Pine Street housing is across the street from the Bloomsburg Care and Rehabilitation Center on East First Street.

The student rental is owned by B&L Properties, which had a property manager inspect the exterior of the building Friday morning.

That property manager said the owner received what he described as “an hysterical call” from a student’s father shortly after the shooting was reported to the 911 emergency dispatch center about 12:05 a.m.

A call placed by a reporter to the main office of B&L Properties in Indiana, Pa., was not returned.

A candidate for Salem Township supervisor allegedly used gasoline and matches to set fire to his own business Thursday night during a dispute with his stepfather, who’s a current...

NORTH CENTRE TWP. — A body was discovered off Moore Road in North Centre Township in a small stream early Thursday, according to the Columbia County Coroner.

BRIAR CREEK TWP. — Monday morning’s fatal tanker truck crash knocked out power to 1,288 PPL customers, and most of them were still without power as of the evening.