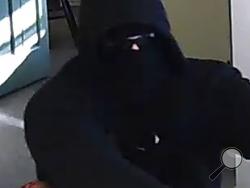 By SUSAN SCHWARTZ
Press Enterprise Writer
BERWICK — Police have released two surveillance photos of the robber who stole a large amount of cash from the Fulton Bank here.

The images show a man dressed all in black, wearing gloves and covering his face with sunglasses and black cloth — possibly a ski mask.

In one picture, he is holding a piece of paper as he approaches the bank’s door.

Officers said he was about 6 feet tall and weighed about 220 to 240 pounds.

Police say the man entered the bank at 200 S. Poplar St. here at 3:09 p.m. Tuesday and gave a teller a handwritten note demanding money. He told the staff he had a bomb.

The tellers handed over a large amount of cash; the robber took it and fled south.

Police Chief Kenneth Strish said the robbery was an isolated event, and no one was injured.

No customers were in the bank at the time, he said.

Strish asked anyone who can identify anything unique in the photos or has information about the crime to call county dispatchers at 570-784-6300.

Susan Schwartz covers the Berwick area. She can be reached at 570-387-1234 ext. 1306 and susan.schwartz@pressenterprise.net, or followed on Twitter at https://twitter.com/PESueSchwartz.