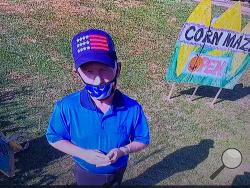 Anyone who knows TV political humorist Samantha Bee’s virulent views on Donald Trump shouldn’t be surprised that the segment of her TBS Channel show “Full Frontal with Samantha Bee” filmed last week at the Retherford’s Farm Market corn maze would slam the president.

And it did, relentlessly, when it aired Wednesday night — also throwing a few barbs at patrons who support him and who (yuk, yuk) think things like corn mazes are entertaining.

But the show also ended with an easing of the ridicule — of area residents, if not the president.

The day that the Emmy Award-winning show’s producers spent in Benton on Oct. 22 resulted in a seven-minute segment that took up the last third of the show, which was themed for Halloween and, of course, the election.

The segment on Retherford’s corn maze started with Bee saying, “only great things happen in corn mazes, which is why I asked [show producers and personalities] to go to one in Pennsylvania and talk to voters about the election next week.”

A voice over said, tongue-in-cheek, that “experts are calling Pennsylvania the tipping point for this election. And for once, it has nothing to do with cows.

“So in the most important election of out time, we will not overlook this critical voting bloc.” It said producers set up “in a cornfield, which is surely going to connect with these rural voters.

“We’re here to answer the question: What will push Pennsylvania to turn left, right or head straight ... to hell.”

The 41/2-acre maze actually is politically neutral, with a design that incorporates both political party symbols — the Democratic donkey and Republican elephant — atop the word “VOTE!”

But most of the 10 interviews show producers conducted via monitors on scarecrows and pumpkin figures in and around the maze seemed to be supporters of Democratic challenger Joe Biden.

“What’s it about Joe that you love him so much?” one woman patron in the maze — the show didn’t identify any of the interview subjects — was asked.

“Um, that he’s not Trump,” she answered.

“It’s worse than a corn maze with no outlet,” the interviewer said.

Another woman in a pair was approached with, “You’re voluntarily entering a giant maze. Is your 2020 not stressful enough?”

“I’ve discovered scotch during COVID, so ...” she answered.

Later, the same woman said Trump supporters have been rough on her on social media.

“Can you tell me what some of the responses are?” the interviewer asked.

“OK, I’m going to suggest you don’t go into the corn maze,” the interviewer said.

The one Trump supporter interviewed told the camera that “the rural, blue-collared workers have been screwed since the 1980s. And that’s really at the heart of Trumpism ... is anger at both the Democratic and Republican establishment.”

The interviewer answered, “Oh, so that what it means to be bipartisan.”

Later, the same man said, “I have cows, and they’re saying cows are putting emissions in the air. I don’t know if it’s the manure or the gas from burping. What are we gonna do? Eat these veggie burgers? Not me.”

The interviewer asked, “So the Republican party is pro-cow burps and anti-veggie burgers?

“I know it sounds really ridiculous,” the man answered.

A voice over wound down the segment by saying, “Guys like this don’t like what’s on the menu. What else can Biden do?”

It then interviewed an older couple who said that, with Philadelphia and Pittsburgh voting heavily Democrat, Biden doesn’t have to win all of the middle of the state — just enough so that those cities sway the vote. “Biden only has to lose by less,” they said.

The segment closed by saying that, “In the spirit of bipartisanship, we’re going to let a Republican give us advice on how to make that change.”

It then showed state Rep. David Millard, R-109th District, without identifying him. The show had called him and asked if he would participate, but the broadcast didn't tell viewers that.

“I hope everybody votes,” Millard said. “And the most important thing, what is paramount, is what you’re doing to promote voting with the show that you’re doing. And thank you for doing that.”

The interviewer told Millard he was “the first Republican to ever thank us for our show.

“We have got to listen to the advice from a republican in a corn maze and vote, because Pennsylvania could still go any direction in this maze. But if we do out part, maybe we can lose by less in the T-zone.”

The episode can be watched at http://bit.ly/SamanthaBeeCornMaze.

Firefighters pulled an unconscious woman and four kittens from a trailer early Monday after using a watering can to douse a fire on the front porch of a Briar Creek Manor home.

GREENWOOD TWP. — A predawn fire gutted a historic general store in the Greenwood Valley, chasing several adults and three children who now live there out into the cold.

RUSH TWP. — A rail expansion at the Boyd Station soybean processing facility is in full swing and should be completed by February, company officials say.

In January of this year,...