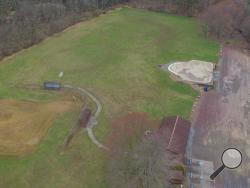 MAHONING TWP. — Vandals tore up sports fields at the Hess Recreation Area here sometime late Thursday or early Friday, with what appears to be one truck and one car, police say.

They caused up to $8,000 worth of damages, according to Montour Area Recreation Commission director Bob Stoudt.

“Based on the tire tracks and patterns, it looks like two vehicles hitting the wettest parts of ground,” Stoudt said last night.

Besides tearing up grass near the restrooms, the tire-spinning culprits dug out numerous donuts on the multi-use field typically used for spring rugby and soccer events.

Those sporting events as well as Geisinger outings at pavilions were postponed due to COVID-19 precautions, but the fields must still be repaired once they dry out, Stoudt said.

“Groups aren’t playing on them yet. And it’s too wet to get in there now and do repairs which could cost up to $8,000. Money we don’t have,” Stoudt said.

Mahoning Township police notified Stoudt of the field vandalism Friday morning and Stoudt posted aerial and ground photos of the damage on the MARC Facebook page.

Police have received several leads from the public, including someone who reported seeing a group of vehicles there about 8 p.m. to 9 p.m. Thursday, Stoudt said.

“We’re hoping to identify them,” he said.

Stoudt can also be reached by email at rstoudt@montourrec.com.

A truck pulling a trailer filled with crates of live monkeys crashed at State Route 54 and Interstate 80 on Friday afternoon, letting loose several of the simians, officials and...

Evy Lysk said she has always tried her best to care for homeless or unwanted cats dropped off or abandoned at her rural Benton home over the years.

BERWICK — Police have arrested the mother who said her infant died while left alone in an apartment with a 2-year-old last...