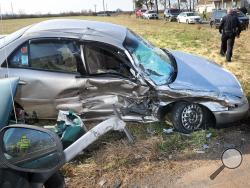 SCOTT TWP. — An 81-year-old man his car pulled into the path of another vehicle, sending both drivers to the hospital Tuesday morning, police say.

He saw the Dodge Dakota 4x4, driven by Nicole Smith, 370 Summerhill Road, Berwick, coming towards him from the opposite direction on Sawmill Road, but “underestimated her speed,” Klingler noted.

As Joline turned, the front passenger corner of Smith’s pickup truck smashed into the passenger side door of Joline’s car, sending both cars spinning through the intersection.

A neighbor who knew the Jolines called his wife, Judy, who came to the accident scene shortly after her husband was taken to the hospital by ambulance.

“Oh my God,” she cried, looking at the wreckage. “Now I have to get another car! That’s two in three years.”

They just bought the car last summer, she noted.

Her husband was likely on his way to Burger King, she added.

“He was going to see the old men,” she said. “That’s where they gather.”

Smith, 36, was also taken by ambulance for treatment, police say.

Emergency crews from Lightstreet and Espy responded to the accident. Both cars were removed from the scene by Mausteller’s Towing.

Montour County is among 17 Pennsylvania counties that on May 29 will move into the least-restrictive “green” phase of the state’s coronavirus mitigation measures, Gov. Tom Wolf announced...

BERWICK — More than 20 feet of concrete soffit from the former Geppetto's crashed onto the sidewalk below on Thursday afternoon, leading the borough to close off the sidewalk around the...

BERWICK — Police found a bloodied man in an apartment in the 100 block of North Mulberry Street this morning, setting off a daylong investigation that still wasn't completed as of late...